Death of the Virgin
Original etching with drypoint
1639

Signed and dated in the plate 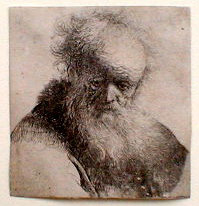 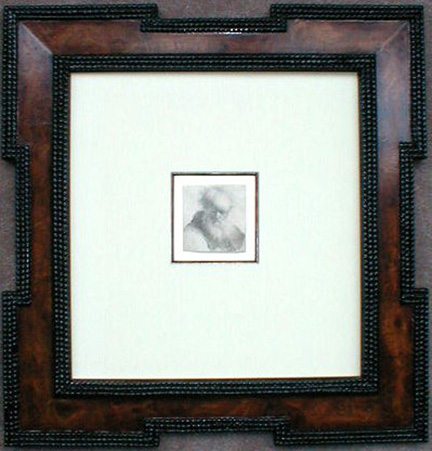 Bust of Old Man with Flowing Beard and White Sleeve
Original etching trimmed to the work
c. 1630
A pale impression of this rare work in its only state
Paper size: 2 1/2 x 2"
Some paper loss in corners
Bartsch catalog number 291
Biorklund-Barnard catalog number 30-10
(Sorry, no longer available)

Thanks to the Microsoft Corporation for permission to use following biographical information from Microsoft® Encarta '97:

Rembrandt was a Dutch baroque artist who ranks as one of the greatest painters in the history
of Western art. His full name was Rembrandt Harmenszoon van Rijn, and he possessed a
profound understanding of human nature that was matched by a brilliant technique- not only in
painting but in drawing and etching- and his work made an enormous impact on his
contemporaries and influenced the style of many later artists. Perhaps no painter has ever
equaled Rembrandt's chiaroscuro effects or his bold impasto.

Life
Born in Leiden on July 15, 1606, Rembrandt was the son of a miller. Despite the fact that he
came from a family of relatively modest means, his parents took great care with his education.
Rembrandt began his studies at the Latin School, and at the age of 14 he was enrolled at the
University of Leiden. The program did not interest him, and he soon left to study art-first with a
local master, Jacob van Swanenburch, and then, in Amsterdam, with Pieter Lastman, known for
his historical paintings. After six months, having mastered everything he had been taught,
Rembrandt returned to Leiden, where he was soon so highly regarded that although barely 22
years old, he took his first pupils, among them Gerrit Dou.

Rembrandt moved to Amsterdam in 1631; his marriage in 1634 to Saskia van Uylenburgh, the
cousin of a successful art dealer, enhanced his career, bringing him in contact with wealthy
patrons who eagerly commissioned portraits. An exceptionally fine example from this period is
the Portrait of Nicolaes Ruts (1631, Frick Collection, New York City). In addition,
Rembrandt's mythological and religious works were much in demand, and he painted numerous
dramatic masterpieces such as The Blinding of Samson (1636, Städelsches Kunstinstitut,
Frankfurt). Because of his renown as a teacher, his studio was filled with pupils, some of whom
(such as Carel Fabritius) were already trained artists. In the 20th century, scholars have
reattributed a number of his paintings to his associates; attributing and identifying Rembrandt's
works is an active area of art scholarship.

In contrast to his successful public career, however, Rembrandt's family life was marked by
misfortune. Between 1635 and 1641 Saskia gave birth to four children, but only the last, Titus,
survived; her own death came in 1642. Hendrickje Stoffels, engaged as his housekeeper about
1649, eventually became his common-law wife and was the model for many of his pictures.

Despite Rembrandt's financial success as an artist, teacher, and art dealer, his penchant for
ostentatious living forced him to declare bankruptcy in 1656. An inventory of his collection of
art and antiquities, taken before an auction to pay his debts, showed the breadth of
Rembrandt's interests: ancient sculpture, Flemish and Italian Renaissance paintings, Far Eastern
art, contemporary Dutch works, weapons, and armor. Unfortunately, the results of the
auction-including the sale of his house-were disappointing.

These problems in no way affected Rembrandt's work; if anything, his artistry increased. Some
of the great paintings from this period are The Jewish Bride (1632), The Syndics of the Cloth
Guild (1661, Rijksmuseum, Amsterdam), Bathsheba (1654, Musée du Louvre, Paris), Jacob
Blessing the Sons of Joseph (1656, Staatliche Gemäldegalerie, Kassel, Germany), and a
self-portrait (1658, Frick Collection). His personal life, however, continued to be marred by
sorrow, for his beloved Hendrickje died in 1663, and his son, Titus, in 1668. Eleven months
later, on October 4, 1669, Rembrandt died in Amsterdam.

Early Painting
Rembrandt may have created more than 600 paintings as well as an enormous number of
drawings and etchings. The style of his earliest paintings, executed in the 1620s, shows the
influence of his teacher, Pieter Lastman, in the choice of dramatic subjects, crowded
compositional arrangements, and emphatic contrasts of light and shadow. The Noble Slav
(1632, Metropolitan Museum of Art, New York City) shows Rembrandt's love of exotic
costumes, a feature characteristic of many of his early works.

A magnificent canvas, Portrait of a Man and His Wife (1633, Isabella Stewart Gardner
Museum, Boston), shows his early portrait style-his preoccupation with the sitters' features and
with details of clothing and room furnishings; this careful rendering of interiors was to be
eliminated in his later works. Members of Rembrandt's family who served as his models are
sometimes portrayed in other guises, as in Rembrandt's Mother as the Prophetess Anna (1631,
Rijksmuseum), or the wistful Saskia as Flora, (1634, the Hermitage, Saint Petersburg).

Perhaps no artist ever painted as many self-portraits (about 60), or subjected himself to such
penetrating self-analysis. Not every early portrayal, however, can be interpreted as objective
representation, for these pictures frequently served as studies of various emotions, later to be
incorporated into his biblical and historical paintings. The self-portraits also may have served to
demonstrate his command of chiaroscuro; thus, it is difficult to tell what Rembrandt looked like
from such a self-portrait as the one painted about 1628 (Rijksmuseum, on loan from the Daan
Cevat Collection, England), in which deep shadows cover most of his face, barely revealing his
features. On the other hand, in none of these youthful self-portraits did he attempt to disguise his
homely features.

Biblical subjects account for about one-third of Rembrandt's entire production. This was
somewhat unusual in Protestant Holland of the 17th century, for church patronage was
nonexistent and religious art was not regarded as important. In Rembrandt's early biblical
works, drama was emphasized, in keeping with baroque taste.

Among Rembrandt's first major public commissions in Amsterdam was the Anatomy Lesson of
Dr. Tulp (1632, Mauritshuis, The Hague). This work depicts the regents of the Guild of
Surgeons gathered for a dissection and lecture. Such group portraits were a genre unique to
Holland and meant substantial income for an artist in a country where neither church nor royalty
acted as patrons of art. Rembrandt's painting surpasses commemorative portraits made by
other Dutch artists with its interesting pyramidal arrangement of the figures, lending naturalism to
the scene.

Middle Period
Many of Rembrandt's paintings of the 1640s show the influence of classicism in style and spirit.
A 1640 self-portrait (National Gallery, London), based on works by the Italian Renaissance
artists Raphael and Titian, reflects his assimilation of classicism both in formal organization and
in his expression of inner calm. In the Portrait of the Mennonite Preacher Anslo and His Wife
(1641, Staatliche Museen, Berlin-Dahlem), quieter in feeling than his earlier work, the interplay
between the figures is masterfully rendered; the preacher speaks, perhaps explaining a biblical
passage to his wife, who quietly listens. A number of Rembrandt's other works depict dialogues
and, like this one, represent one specific moment. In the moving Supper at Emmaus (1648,
Musée du Louvre), Rembrandt's use of light immediately conveys the meaning of the scene.

His group portraiture continued to develop in richness and complexity. The so-called Night
Watch-more accurately titled The Shooting Company of Captain Frans Banning Cocq (1642,
Rijksmuseum)-portrays the bustling activity of a military company, gathered behind its leaders,
preparing for a parade or shooting contest. In departing from the customary static mode of
painting rows of figures for the corporate portrait, Rembrandt achieved a powerful dramatic
effect. Despite the popular myth that the painting was rejected by those who commissioned it,
and led to a decline in Rembrandt's reputation and fortune, it was actually well received. Many
of Rembrandt's landscapes in this middle period are romantic and based on his imagination
rather than recording specific places. The inclusion of ancient ruins and rolling hills, not a part of
the flat Dutch countryside, as in River Valley with Ruins (Staatliche Gemäldegalerie, Kassel),
suggests a classical influence derived from Italy.

Late Period
Rembrandt's greatest paintings were created during the last two decades of his life. Baroque
drama, outward splendor, and superficial details no longer mattered to him. His self-portraits,
portrayals of single figures and groups, and historical and religious works reveal a concern with
mood and with spiritual qualities. His palette grew richly coloristic and his brushwork became
increasingly bold; he built thick impastos that seem miraculously to float over the canvas. In
Portrait of the Painter in Old Age (1669?, National Gallery, London), Rembrandt's features
betray a slightly sarcastic mood. One of his finest single portraits (1654, Stichting Jan Six,
Amsterdam) is that of Jan Six. Six, wearing a deeply colored red, gold, and gray costume, is
shown putting on a glove. The portrait is painted in a semiabstract style that demonstrates
Rembrandt's daring technical bravura. Six's quiet, meditative mood is expressed by the subtle
play of light on his face. In such late biblical works as Potiphar's Wife Accusing Joseph (1655,
Staatliche Museen, Berlin-Dahlem), and the very moving Return of the Prodigal Son (1669?,
the Hermitage) Rembrandt concentrated on the inherent psychological drama rather than on the
excitement of the narrative as he had in works of his early period. In general, after his early
period, Rembrandt was not particularly interested in allegorical and mythological subjects.

Graphic Work
For Rembrandt, drawing and etching were as much major vehicles of expression as painting.
Some 1400 drawings, recording a wide range of outward and inner visions, are attributed to
him, works mostly done for their own sake rather than as preparatory studies for paintings or
prints. The majority of them are not signed, because they were made for his private use.
Rembrandt's early drawings (of the 1630s) were frequently executed in black or red chalk; later
his favorite medium became pen and ink on white paper, often in combination with brushwork,
lending a tonal accent. In some drawings, such as The Finding of Moses (1635?,
Rijksprentenkabinet, Amsterdam), a few charged lines indicating three figures carry maximum
expression. Other drawings were, in contrast, highly finished, such as The Eastern Gate at
Rhenen (Oostpoort) (1648?, Musée, Bayonne, France), which displays details of architecture
and perspective. He made masterful drawings throughout the early as well as mature phases of
his career. An example of an early work is Portrait of a Man in an Armchair, Seen Through a
Frame (1634, private collection, New York City), done in chalk, considered Rembrandt's most
finished portrait drawing. Superb later works are Nathan Admonishing David (1655-1656?,
Metropolitan Museum), done with a reed pen, and a genre piece, A Woman Sleeping
(Hendrickje?) (1655?, British Museum, London), a powerful brush drawing universally praised
as one of his finest.

Rembrandt's etchings were internationally renowned even during his lifetime. He exploited the
etching process for its unique potential, using scribbling strokes to produce extraordinarily
expressive lines. In combination with etching he employed the drypoint needle, achieving special
effects with the burr in his mature graphic work. Indeed, Rembrandt's most impressive etchings
date from his mature period. They include the magnificent full-length portrait of Jan Six (1647,
Bibliothèque Nationale, Paris), the famous Christ Healing the Sick, also known as the 100
Guilder Print (1642-1645?), the poetic landscape Three Trees (1643), and Christ Preaching, or
La Petite Tombe (1652?), all in the British Museum.

Return to the top of this page

Saper Galleries....where excellence is the standard!